Cart 0
We have been taking elderberry syrup in my home for years to help with everything from being run down, common colds and illnesses, allergies and I even took it this past year to help boost my immune system from a case of mastitis. I adjust the recipe here and there to provide better benefit for the issue at hand. 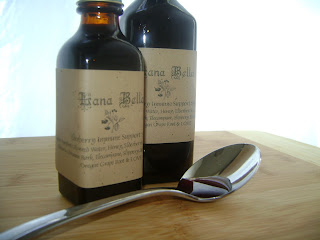 My current batch of elderberry syrup is inspired from the hard crafting ladies of BEST who have been working so hard to make wonderful treasures and goodies for you. Lack of sleep is the worst thing you can do to your body as that is when we heal and replenish ourselves. On top of lack of sleep they are going to have many many interactions with hundreds of people and anytime you interact with many people you introduce yourself to different things not bad just different and its those interactions that put our immune systems on alert. I want these new friends of mine to not have to worry about coming down with a cold when they can least 'afford' to thus Elderberry Immune Support Syrup! 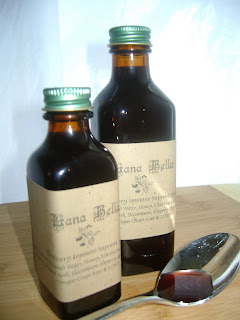 What do these herbs do?
Elderberries are known to be effective in fighting at least eight 8 strains of influenza suggesting elderberry is superior to vaccines in flu prevention because vaccines can only protect against know strains that are also continuously mutating. It was also found that elderberry disarms the enzyme viruses use to invade otherwise healthy cells in the linings of the throat and nose. Taken before an infection it will help prevent an infection, after it will help prevent the spread through the respiratory and other systems.

Licorice Root's most common use world wide is to treat common colds and coughs. In Chinese Medicine it is also used to treat fatigue. Has a generally pleasing taste.

Rosehips have one of the most concentrated forms of vitamin C that is available which has led to them being included in many cold preventatives and remedies such as this very syrup. In addition to vitamin C, rosehips also contain vitamins A, D and E, as well as antioxidant flavonoids that may reduce the effects of aging and help prevent cancer. The various flavonoids in rose hips have potent antioxidant action, helping to protect the body from the effects of stress, aging and the environment. The iron in rose hips make them an excellent supplement for women.

Echinacea is one of the first choice herbs for the treatment and preventions of colds because of its immune stimulating qualities.

Cinnamon is one of the most recognizable of flavors in the world, has been used  in just about every type of food product available. Cinnamons beneficial effects on the digestive tract are attributed to its antioxidant catechins, which may also help fight bacterial, fungal, and parasitic infections. Cassia bark has been used for over a thousand years in both Eastern and Western medicine in treating chronic diarrhea, colds, kidney trouble, abdominal and heart pains, hypertension, and cancer, among others.

Elecampane related to both sunflowers and ragweed is named for Helen of Troy, who carried its flowers with her. In traditional Chinese Medicine and Ayurvedic medicine it is recommended for bronchitis and asthma. During the middle ages it was regarded for restoring health to the heart. It is an antiseptic expectorant and will relieve chest congestion. As a bitter it will also stimulate digestion.

Slippery Elm Bark added to hot water has a slippery consistency and was also served as a food during famine and for making porridge for small children and elderly persons. The mucilage in slipper elm bark also relieves inflammation and irritation in the throat and urinary tract. Slippery elm also helps neutralize excess stomach acid.

Ginger Root is probably the most widely used remedy on the planet being used as both food and medicine. Fresh ginger is used to relieve dryness and heat, while dried ginger is used to relieve dampness and chill. Scientists have found evidence to support ginger's wide range of medicinal actions including lowering cholesterol levels, relieving allergies and asthma, arthritis, colds, and nausea; and protecting the digestive tract and liver against toxins and parasites. Laboratory science confirms the concentration of compounds found in raw ginger  kills cold viruses. Ginger is especially useful in small doses in pregnancy as  an age-old remedy for morning sickness.

Oregon Grape Root is a useful substitute for goldenseal, which has been over harvested in the wild. Oregon grape root may also give the immune system a mild boost. Oregon grape root and other herbs that contain berberine are scientifically proven to protect against bacteria, viruses, fungi, protozoans, worms, and chlamydia.

So there you have it a handcrafted alternative to chemical laden over the counter cold products. Herbal syrups are fun and easy to make and last typically 2-4 months if refrigerated and taste good too! Enjoy I know my family does. 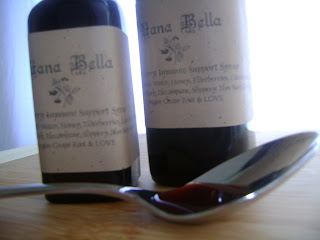 For educational purposes only. This information has not been evaluated by the Food and Drug Administration.
This information is not intended to diagnose, treat, cure, or prevent any disease.
By purchasing and/or using any items from Lana Bella, it is implied that you have read and understand the risks of using herbs and herbal products and therefore release Lana Bella from any and all liability.
Please do your own research and/or discuss with your healthcare provider before using herbal products.