Cart 0
Since I was a little girl and my grandfather was diagnosed with lung cancer its always been on my mind and supporting research or those with cancer has always been dear to my heart. Those days spent sitting in a bed next to him reading to him even after he fell asleep are some of my fondest and saddest memories. I remember walking the streets of my neighborhood asking for donations whenever a new packet would come in the mail lung cancer, leukemia, the heart association I'd fill out all the paperwork in my best handwriting feeling so proud that I was doing something to help. I'd skip playing with friends ( a big thing in the 8-11 age bracket) to go door to door doing my part. Sure I often got invited in when it was cold for a cocoa or some cookies or sometimes I was just the only face they had seen that day, or week and people just wanted to talk sometimes it was for fifty cents (as we lived in one of those working class suburban neighborhoods in the old italian section of town) sometimes it was for ten whole dollars I didn't care I was a kid it was the mid 80's .50 still meant something.


Fast forward some 25 years I've lost three of my grandparents now to one type of cancer or another, had cervical cancer myself over 10 years ago but none of that hit home harder than what was to come.


To say that my Mom and I haven't had the best relationship ever would be an understatement. She knows all the buttons to push, views the world differently than I, and is so much more trusting of other things which just sets us off on each other. In so many ways the best thing for our relationship was being 1000 miles apart when we moved to South Carolina. In the past four years I've seen my mom twice for less than a week both times and that was fine. So much changed this past winter. Just after Christmas my mom called and told me they found something on her mammogram and they wanted to look further into it. I honestly didn't think anything of it because she has had a few non cancerous cysts removed over the years. They kept looking at it one doctor saying it was nothing but luckily her radiologist was very insistent that it wasn't nothing and kept checking it.


In late February just days after her 55th birthday she got the dreaded news it was Breast Cancer. It would take two months of weighing the lumpectomy/mastectomy and co-ordinating the surgical schedules of her doctors before her surgery. What was thought to be nothing by doctors just four months earlier and then changed to a stage 2 just before surgery changed drastically to a stage 3B post op and after scans revealed spread to her lymph nodes.


I'm dealing with the emotional aftermath of feelings of how this woman my mother who I've never been overly close to could very well have been gone had this one radiologist not been so insistent, and with the idea of no longer having a mother possibly sooner than later. I've never once thought of my Mom as an optimistic person (to which she will beg to differ), but this diagnosis has changed that. We are closer than we have ever been. It has changed everything, how she eats, how she lives, how she looks. 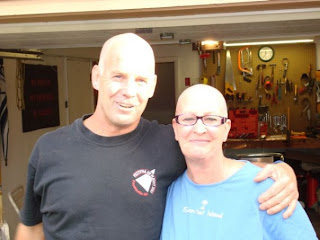 Somehow this has all made my Mom a much more optimistic person, someone I want to take this second chance with and really get to know while I can.
Not long after my Mom started chemo she got even more bad news, she was being downsized because of the failing economy. Its been a blessing and a curse. While she can concentrate on getting through chemo and not have to feel pressured about missing too much work, she now is out of work and has medical bills piling up. So this October for me its not about supporting more cancer research its about helping to deal with the aftermath of a failing economy and a cancer diagnosis. My mom still had months of chemo left and then radiation in her treatment and thousands of dollars in medical expenses so this October I'm thinking pink closer to home and will be donating 10% of all sales to my Mom's medical bills and for every 10 items sold you get a little surprise treat and she gets and extra $10! What are you waiting for go  SHOP NOW!
I also have it on good authority that some of my fellow BEST members are also donating to cancer causes as well so be sure to check out greenstarstudio and Spa Therapy Works and see just what they are up to as well.